In the Layers panel, you will find multiple options, or layers (as they are called by GIMP) available. Think of a layer as a piece of an image. If the image was laid horizontally, you could theoretically stack things on top of the image. Each thing you stacked would be its own separate layer.

Layers can be nested, or grouped under other layers. The order of layers is important, as much like in real life, if you stack a larger object on top of a smaller object, you will no longer see the smaller object. The same can be said with the layers of an image. If, for example, the sash on your uniform was on its own separate layer from the uniform coat, and ordered under the uniform coat layer, the sash would not be visible. With that being said, the following layers are available in the template file from top (highest) to bottom (lowest):

A new window will appear. Give the layer a name, then press OK. 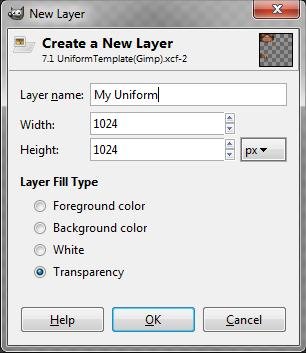 You’ll see your newly created layer in the Layers panel. As we discussed earlier, the order of layers in the Layers panel is important. Be sure that your new layer is between the Cloth Texture Overlay and Uniform Color layers. Whenever you’re designing the custom uniform, you will want to be sure that this new layer is selected for editing. Again, you do not want to edit the template layer!

Click through to the next topic, Select Paths to Edit, to continue.