You have completed the first 48 counts of drill. Let’s move on to the next set. In the final set of the drill we will:

Click on the Knife tool in the Tool Palette. A Knife/Glue Control Panel will appear

We will cut the arc into two smaller arcs. With your cursor, click on one of the two positions closest to the left of the 50 yard line. A red bubble will appear. 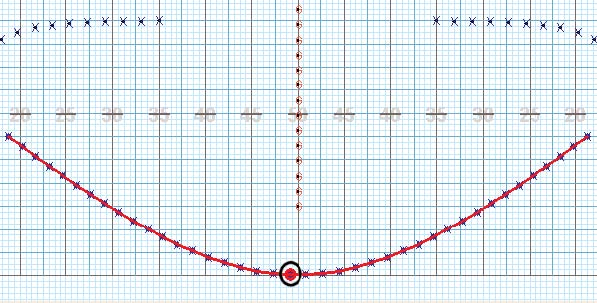 Now click on the other position closest to the 50 yard line. A gap will appear between the two positions indicating the large arc is now two smaller arcs.

Click on the Curve tool in the Tool Palette. A Curve Tool Control Panel will appear.

In the Curve Tool Control Panel, enter “20” in the Positions text box.

Uncheck the Omit Overlaps option. Check the Predict Next option.

On the field, click the following points to create the shape of the curved form.

While entering these points, the red editing handles will appear at each point. These editing handles can be dragged to adjust the shape. We are creating this curve with only four points because the fewer number of editing handles the smoother the curves of the shape will be.

Enter in the Clone text box “1”. Two mirrored shapes of 20 positions will appear.