The Traditional Tool aids in creating multiple maneuvers and combining them over the course of a single transition.

Editing handles appear on each performer. Drag any performer to determine the initial marching direction for all for of the performers.

As you drag an editing handle an action line will appear on the field. This action line designates the starting line for a Route (maneuver) to begin. As each performer crosses this line, the performer will begin following the Route. 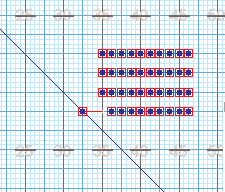 In this example, the performers are initially moving in the same direction as the leader (left). As they cross the action line, the performers begin the route. In this case the route is a simple LF (Left Flank). 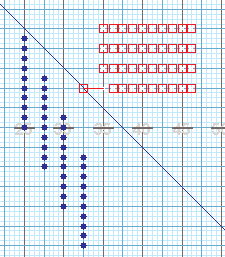 The Traditional Tool allows you to create multi-maneuver transitions. These transitions are created by entering Routes consisting of a combination of moves. There are 8 different moves available:

LF: Left Flank
RF: Right Flank
MT: Mark Time
FM: Forward March
TR: To the Rear
ST: Step Off (such as step 2)
SD: Drop Off (such as drop 2)
H: Half Stride (taking a half distance step)

Routes are entered in the Route box by typing the code for the move followed by a number of steps. Each move is separate with a comma.

The above example is a Left Flank (LF), then take 2 steps and make another Left Flank (LF), then continue marching to the end of the transition. This is a standard left Counter March. When entering the route in the Route text box, the description of the maneuver(s) will appear in the Description area. This will help you confirm that you are entering a correct route.

Action Line Slope changes the slope of the starting line of the route. Typically the slope will be 0. However you can set the line to a 45 degree slope which allows you to create column left and right formations. There are 7 different settings of slope available: no slope, 22.5, 45, 67.5, -67.5, -45, and -22.5 degrees. Any selection will influence the direction the column will turn.

Save will save your route as a traditional maneuver to be used again later.

Copy will open and display a saved route.

Delete will delete a saved route.

Revert resets the handles to their initial position.

Accept accepts the shape into the drill.