The Curve tool is used to create curvilinear shapes, both symmetrical and asymmetrical.

Clicking on the Curve tool will display the Curve Tool Control Panel.

*The fewer points you have on the curve, the smoother it will be.

The Del Last button is used to remove the last entered point when creating the curve.

The Del Half button is used to reduce the number of points entered in half by deleting every other point entered on the field. This is useful if you have too many points to form a smooth curve.

Mixed Intervals are also entered by pressing the

button. This option will allow you to have different intervals in one form. Mixed Intervals are extremely useful when charting large instruments or instruments that are close together but vary in size (drum lines, for example). 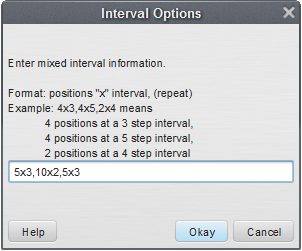