The Symbol Map Editor is a huge time saver in 3D. With this tool, you can save a set of default values (such as uniforms and instrumentation) for symbols you frequently use when designing, then apply these values with the click of a button. 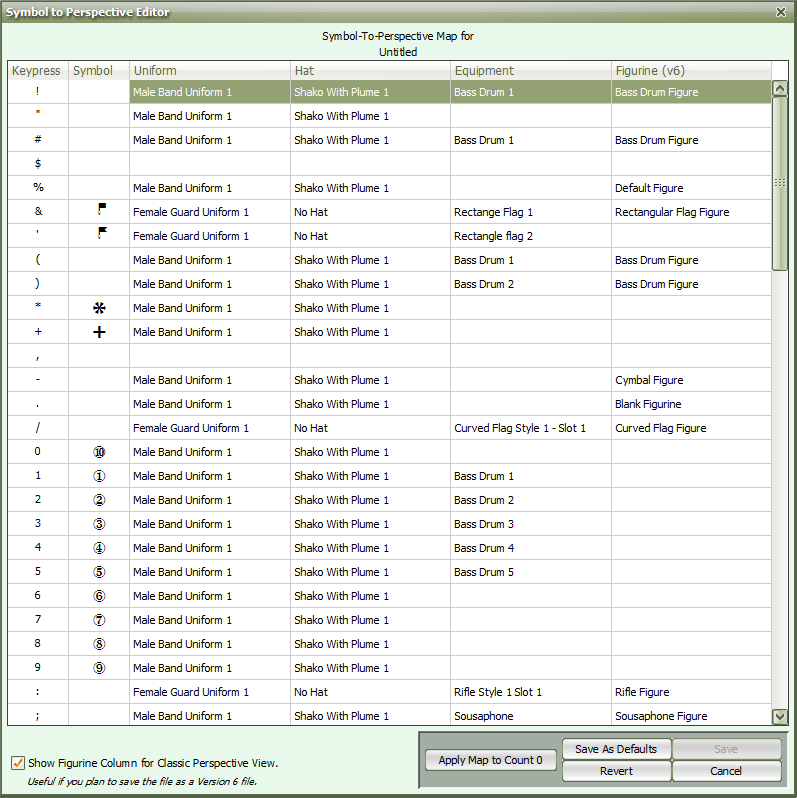 The Keypress column shows what buttons are available for symbols. These cover the majority of keys on your keyboard. The keypress is which key you press in the “Symbol” blank in the Performer Labeling tool when assigning symbols to peformers.

The Symbol column shows what symbol is displayed based on the keypress you entered. Some fonts have special characters for certain keypresses. For other fonts, the keypress and symbol might be close to identical.

The Uniform column allows you to set which uniform you would like to be assigned for which symbol.

Like the uniform column, the Hat column allows you set which hat you would like to be assigned for which symbol.

The Equipment column displays what equipment or instrument the performer will carry for the assigned symbol. For example, by default, the F symbol carries a flute.

The Figurine column is used for the Classic Perspective View.

Apply Map to Count 0 (zero) will assign equipment and uniforms from the Symbol Map to the performers in your drill file, based on the symbols you gave performers through the Performer Labeling tool.

Save as Defaults will remember any changes you have made to the Symbol Map Editor for use in any future file.

Revert will revert any changes made back to the last saved version of the Symbol Map.