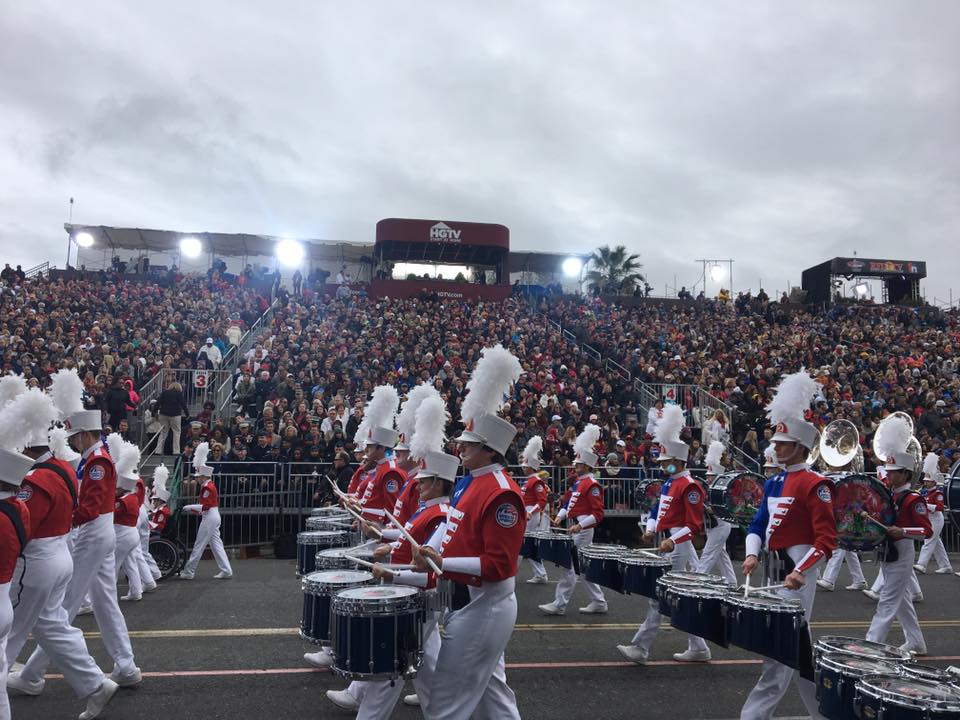 Imagine assembling 300 of the most talented musical performers throughout the United States. Imagine appointing one of the most accomplished directors to lead such an ensemble. Imagine placing them in Pasadena, California in front of millions….

Imagination comes to actuality at the 128th Rose Bowl Parade!

One of the most recognizable, distinguished directors, Bob Buckner, was invited to lead this phenomenal group of musicians and athletes at the 2017 Rose Parade.

Bob Buckner is an irrefutably brilliant director. Before being inducted into the Bands of America Hall of Fame, Buckner served as the head director of the Western Carolina University marching band for twenty years. He has a knack for developing programs and launching them to the top. In 2009 under Buckner’s direction, the Western Carolina Pride of the Mountains marching band earned the Sudler Trophy, which is the most esteemed honor a collegiate marching band can accomplish. He refused to stop there… Buckner continued to guide the Pride of the Mountains to the 2011 Tournament of Roses Parade. During his journey to the parade, Eric Martin, the Executive Director of Music for All, the organization responsible for producing Bands of America, gave him a call. He asked if Buckner would be interested in taking the position of lead director at the 2013 and 2017 Rose Parade.

Serving as the head director of the Bands of America National Honor Band must rank high on any professional director’s list of accolades.

How did it feel to receive such an invitation to lead 300 of the most talented musical performers across the United States?

“I was extremely flattered to be chosen as the director of the Bands of America National Honor Band. I have been a long time supporter of Music for All. Larry McCormick (Founder of Music for All) is a true visionary and his creation of this organization has changed many ways about the bands activity in an extremely positive way. I consider this opportunity close to the top of the list in professional accomplishments.”

It takes a certain synergy to build such an exceptional ensemble and performance. Mr. Buckner made it clear that much credit is due to the group of educators that assist with the development of Bands of America. After listening to numerous auditions and completing the selection process, the instructors meet the band members for the first time and begin teaching them with merely days before they are expected to perform in front of millions. Taking this into account, the Rose Parade is truly a sensational accomplishment for all those involved.

Bob Buckner has been a long time client and colleague of Pygraphics and a dear friend to our Pyware team. We are so humbled to be a part of Mr. Buckner’s story and honored to play a part in the learning process of his protégées.

How has Pyware impacted the quality of performances and training process of your students throughout your career?

“From a designer’s viewpoint, Pyware is eye-opening and has become an indispensable tool. From the student and teacher’s perspective, it has totally changed the manner in which drill design is taught.”

The Pyware team could not be more pleased to work with such an astute, remarkable designer and director as Bob Buckner. We are in awe of his work and are honored that the feeling is reciprocated.

“No other development has improved the quality of my professional life as a designer and teacher like Pyware.”

Congratulations to all involved in the Bands of America National Honor Band’s phenomenal production; thanks for kicking our new year off in style!