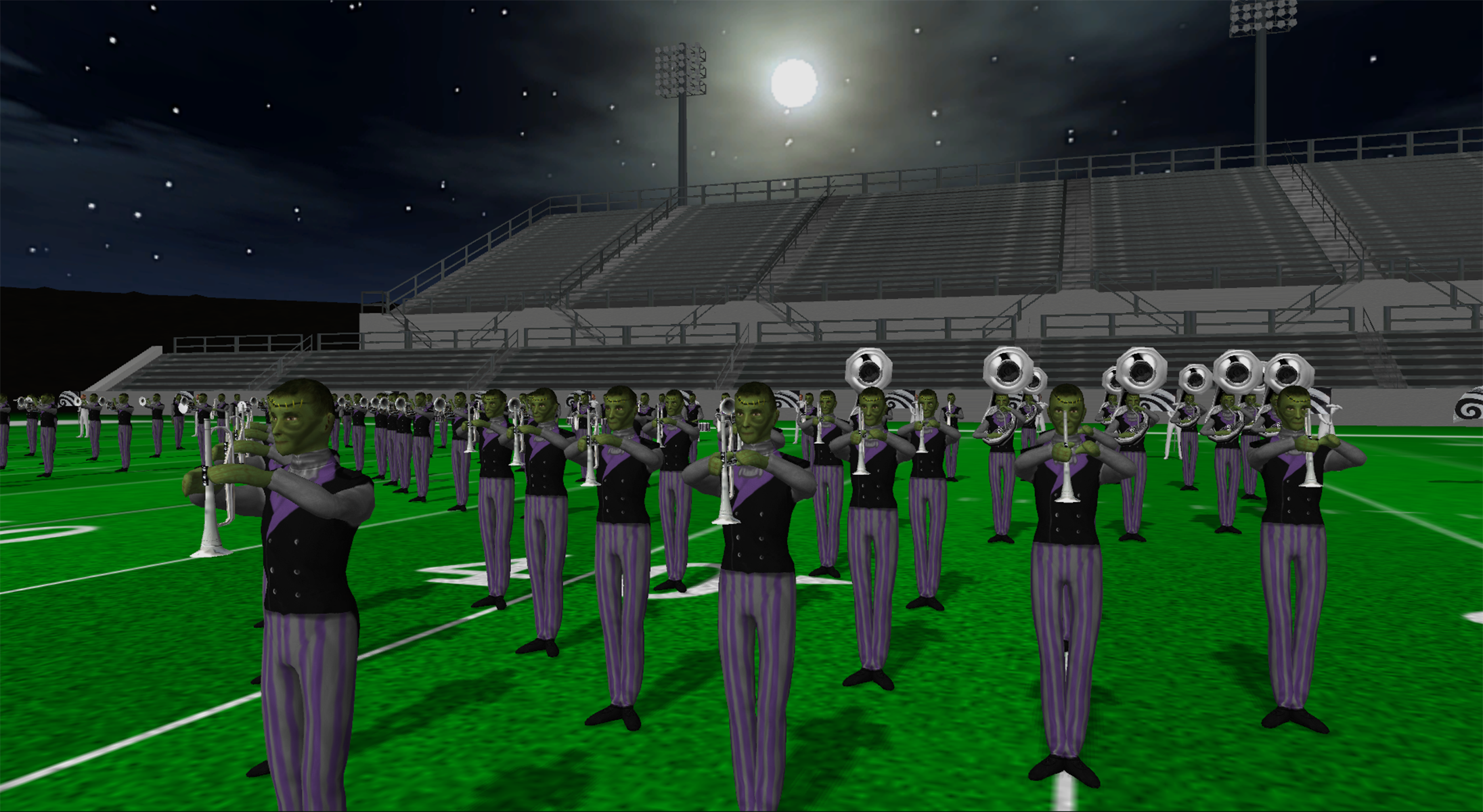 It all started with an idea. A thought passing by. A dream, if you will.

Take marching band music and design a show for it. Pretty standard stuff. Except the designer isn’t getting paid for it; in fact, they are doing it for fun. And instead of one designer, outsource the work so multiple designers collaborate to chart the show. Think of it as a round-robin drill design experience. Sounds more like a nightmare than a dream, right?

Except you’d be wrong. Enter the Frankendrill.

Gordon Couch of Gordo Drill Solutions posed the idea in a facebook group in August. With the design season wrapping up, as crazy as it sounds, some designers had A) free time and B) the desire to chart more, so volunteers started tossing their names in the hat for participation. Crazy, right?

Being that fall was just around the corner, it almost seemed too easy to take this amalgamation of show design and put a Halloween spin on it. Key Poulan generously donated his seasonally-appropriate Boo! In the Hall of the Mountain King. With droves of participants at the ready and show theme secured, this monster was coming to life.

Videos of all creations can be found on the Key Poulan Music facebook page.

We chatted up Gordon to get a peak inside the lab – transcript below.

Pyware: How did the idea come about?

Gordon: I was nearing completion of my writing schedule for the ’18 season and I think my mind wandered. I know what thought caused Frankendrill to come about, but I can’t pinpoint what thought caused that thought, you know? I asked a casual question on one of our private drill designer groups if anyone had completed a show “by committee.” The replies that followed moved me onto what would become Frankendrill. You coined that name, by the way, a few days after this ball got rolling. You know what’s funny to me is I was ending my third year as alumni President of The Cavaliers and I was leaving that office because, as I put it, I wanted fewer things to think about among other things and then I go and create something (like this) that I have to keep track of while also starting a new home improvement business?! I was trying to streamline my life right when this started! I must be crazy!

P: Round-robin techniques are popular across various mediums for team building, creativity, and expression. Any concern applying it to drill design, an industry that’s typically an individual’s responsibility?

G: I had this conversation a couple times during the course of this endeavor. The stakes were pretty low with this from an immediately-practical perspective because there was no money or trophy to win. The participants were told they would receive some notoriety for their participation and while there is certainly a great deal in value in being a participant with something that has this kind of unique visibility for advertising purposes, there was no tangible reason for there to be a good team or teammate.

Most feelings of team building were generated by the designers in the teams and I think there was a healthy amount of that and everyone was very positive! It’s interesting now that I think about it. Many of us are competitors. It’s possible one had to work with someone they would normally be hoping to beat in GE Visual on Saturdays!

I think the more interesting question was the personal aesthetic of each individual designer and how that would meld (or not) with the designers around them. I feel our perspectives on that is borne from the type of clients were generally service. For me, I have certain rules I always follow when writing based on the type of clients for which I write. Other designers probably have a unique framework they choose to write within, also. Those rules dictate to a great degree what they can create. Sometimes, rules aren’t compatible! Were they compatible in this exercise? I think that answer is in the eye of the beholder. There were things I saw I wouldn’t have chosen to write because of my own set of rules I like to follow or because they were brilliantly unexpected! In a real-world application where there may be a drill designer and guard designer or band director working together through Pyware, I would think there would be a good amount of planning beforehand that none of the participants had in this instance. With a good relationship and planning, I think this kind of thing could reshape things on a large scale. The only question then would be could most clients afford it.

P: What’s your biggest take away from the experience?

G: My biggest takeaway here is that Pyware is a great platform for collaboration! I mean that sincerely. We designers know there are other solutions for show design. I think the sheer prevalence of Pyware makes it a great collaborative platform if one chooses to take that approach. I can report from my own experience doing what I call “clean up” work for other designers, adjusting for numbers on a [stock] show, or working closely with another designer on the same show, being able to see the ease with which Pyware can be employed on a very large, complicated project like this one shows its flexibility and utility. 41 designers using the same software – some for the first time – on the same project?! No hitches ANYWHERE in this thing experienced by anyone?! Pyware got a workout and came out the winner.

P: If you could do it all over, would you change anything?

G: If I could change anything I think it would be making sure all participants had time to do it. When this finally got fleshed out into a real project with rules and rosters and whatnot, I imagined each designer could handle their six or seven phrase chunk in about an hour or so. The idea wasn’t to make something competing in BOA Grand Nationals or DCI World Championships, it was to create a workable, attractive show following simple rules. But I know now that my expectation may have not been practical.

I write quickly as well as some others. But I also know all designers take different amounts of time. Also, this began at the end of August and several designers are still waist-deep in clients and don’t have time to devote to other projects at that point on the calendar. If I’m a designer and I have to choose between finishing a project for a client who is depending on me – IS PAYING ME – I’ll focus on that client and “Gordo’s” little science fair project is going to take a back seat! So time and making sure everyone was committed to picking up their part in a timely way and complete it in a reasonable amount of times are things I’d do differently for sure.

This may surprise people who know me to see me write this but I don’t like coming off as a bossy person! Towards the end of this, as we neared the end of October, I felt like a rowing coach yelling a megaphone to keep things moving towards the end. I was uncomfortable with that because I want everyone to be happy and I felt like I was doing the opposite of that!

G: I don’t know. I can’t remember the last time a horror film was actually frightening to me. Most of what we call horror are really just slasher flicks or gore and those aren’t scary. What’s truly scary? Those are stories that make you uneasy on a deeper level. The most scary film I’ve seen recently would have to be Robert Eggers’ film The VVitch. But, c’mon, man. We all know Evil Dead 2 is the best, right? Who doesn’t love Ash?

Special thanks go out to Gordo Drill Solutions and Key Poulan Music for allowing us to sponsor the event.