Manning the Rails for the NHL

Manning the Rails for the NHL 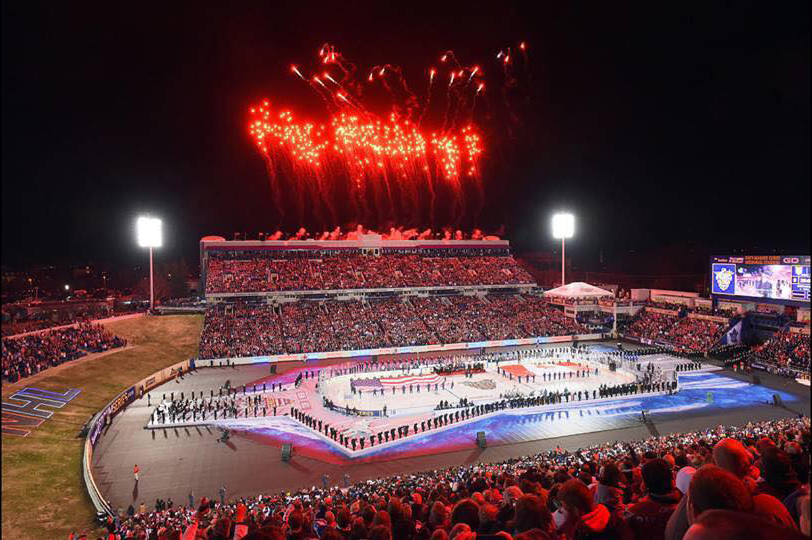 In their own football stadium.

Annapolis found itself home to the NHL Stadium Series this past Saturday, which is one of the regular season outdoor games played in the NHL. A rink was built inside the Navy-Marine Corps Memorial Stadium, and the stage was set for the Washington Capitals to take on Toronto’s Maple Leafs.

As part of the pregame fanfare, the U.S. Naval Academy Drum & Bugle Corps was tasked with formulating a live performance for the hockey crowd, as well as all those watching the nationally televised game at home.

We sat down to chat with Jeff Weir, Civilian Director for the U.S. Naval Academy Drum & Bugle Corps, about the process.

Tell us about the U.S. Naval Academy Drum & Bugle Corps:

The U.S. Naval Academy Drum & Bugle Corps (D&B) is the oldest continuously active drum corps in the US, dating back to 1914. It is an extracurricular activity for students enrolled at the Naval Academy, and functions similarly to a traditional college band, but with only brass and percussion. We support Navy football and basketball games, providing halftime shows and pep bands for dozens of Navy sporting events. We also support a number of ceremonial functions at the Naval Academy, such as formations and dress parades.

What does it mean to be a Civilian Director?

I, along with our assistant director, provide oversight and creative direction to our midshipman leadership team. The midshipmen use the D&B as a leadership training tool, organizing the logistics for the corps, while the staff (which includes myself, an assistant director, an officer representative, and an enlisted representative) provide guidance and oversight. My assistant and I coordinate the creative aspects of the corps, such as music, drill, and rehearsals.

In our industry, when you hear “Drum & Bugle Corps”, you think DCI. Does the U.S. Naval Academy Drum Corps compete?

There used to be an annual “Interservice Academy Drum Corps Competition” between Navy, Air Force, and Coast Guard. But it was decided that preparation for the competition took too much time away from the cadets/midshipmen studies and physical training, so it was put on hiatus.

How were you approached by the NHL to perform at the game?

The Naval Academy athletic department and the NHL worked out a deal to have the NHL’s “Stadium Series” host a game at Navy-Marine Corps Memorial Stadium (our football stadium). As meetings and discussions were being held about the event, the NHL wanted to incorporate as much of the feel of a Navy football game as possible, so that naturally led to involving the Drum & Bugle Corps and Cheerleaders, among others.

To clarify, was this performance only the U.S. Naval Academy D&B?

No, the entire game was filled with various performances by a wide array of Naval Academy groups, including the Drum & Bugle Corps, Cheerleaders, Dance Team, Pipes & Drums, the USNA Band (which is a professional enlisted band), among others.

Explain the staging process you took in Pyware for this performance.

Once the NHL provided us with the CAD drawing of the aircraft carrier “stage” they were building around the ice rink, I knew I could use Pyware to help visualize the pregame entrance. The NHL folks needed to be able to visualize the show, and since there would be about 200 midshipmen outside the Drum & Bugle Corps involved, and they had little to no “field show” experience, I knew it would be easier to show the idea to them rather than explain it to them. The show idea was to have the midshipmen “man the rails” of the carrier to set up the player introductions and national anthems. Manning the rails is a Navy tradition when a ship deploys or returns from deployment; the crew of the ship will stand at attention around the perimeter of the deck. It is a very visually stunning moment, and a very proud tradition in the Navy. It fit perfectly with the pregame elements of the game. I first scaled the CAD drawing to the football field in Pyware, using the .jpg (image) as sort of an indoor floor on the field. Then I used the drawing tools to quickly figure out how many midshipmen we would need to man the rails. Once I had them in position, I wrote backwards to have them Follow the Leader from the tunnel onto the ship. The video preview was sent to the NHL producers, and various tweaks were made, including the timing of pyrotechnics. I heard dozens of times from the NHL staff how valuable it was to have a computer animation/simulation of the pregame to help them work out the details.

I heard dozens of times from the NHL staff how valuable it was to have a computer animation/simulation of the pregame to help them work out the details.

How complex/easy was it to adapt 3D for an “outside of the box” performance?

It was quite easy using all of the various features of Pyware.

What process did you use to teach the performers the show?

This is where we departed a bit from the normal “drum corps” teaching experience. Since most of the performers had no marching band/drum corps/field show experience, the charts were turned over to a USMC Gunnery Sergeant to translate into a more…”military training environment.” We didn’t use coordinate pages or charts, per se. The main advantage of using Pyware was the animation to help visualize the event.

Thank you, Jeff, for the insight on such a unique performance, as well as drafting what is sure to be a unique memory for the hundreds of performers during the show.