Posted by Barbara-Scott Kolb on November 22, 2021 | Featured | No Comments

This year, the iconic Macy’s Thanksgiving Day Parade will return in all its traditional glory! The streets of NYC will once again welcome back spectators to celebrate the parade in its true form. Balloons, floats and performers are all back live, for this 2021 Thanksgiving celebration… And let’s not forget the 10 fantastic marching bands! Some returning from years past, some making their Parade debut! Let’s take a look at this year’s lineup!

In their over 100-year history, the University of Alabama will make its very first appearance at the Macy’s Thanksgiving Day Parade. The Million Dollar Band has become a staple of America’s college marching arts, recognized as the sound behind the mighty Crimson Tide. The 400-member band routinely performs in front of millions and received the Sudler Trophy in 2003 — the prestigious national award honoring excellence in the college marching band activity.

Director Ken Ozzello has been writing drill for the program for over 30 years, leading the band to numerous coveted awards. He has been published in the Teaching Music Through Performance in Band series, holds a membership in the American Bandmasters Association and was named the 2012 recipient of the Morris Meyer Award for outstanding contributions to student life at the University of Alabama.

Ken has used Pyware since it was first released circa 1982 and used the software for this year’s special parade performance. 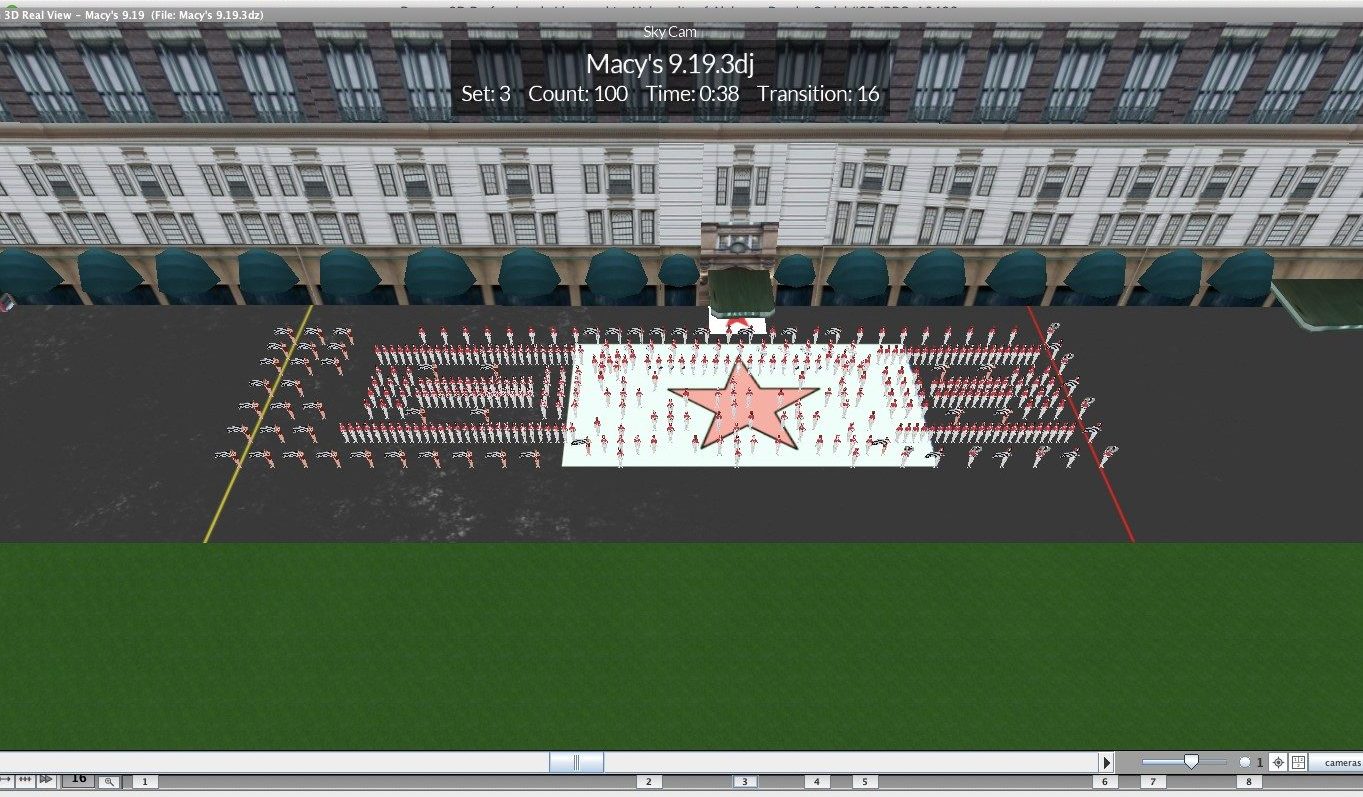 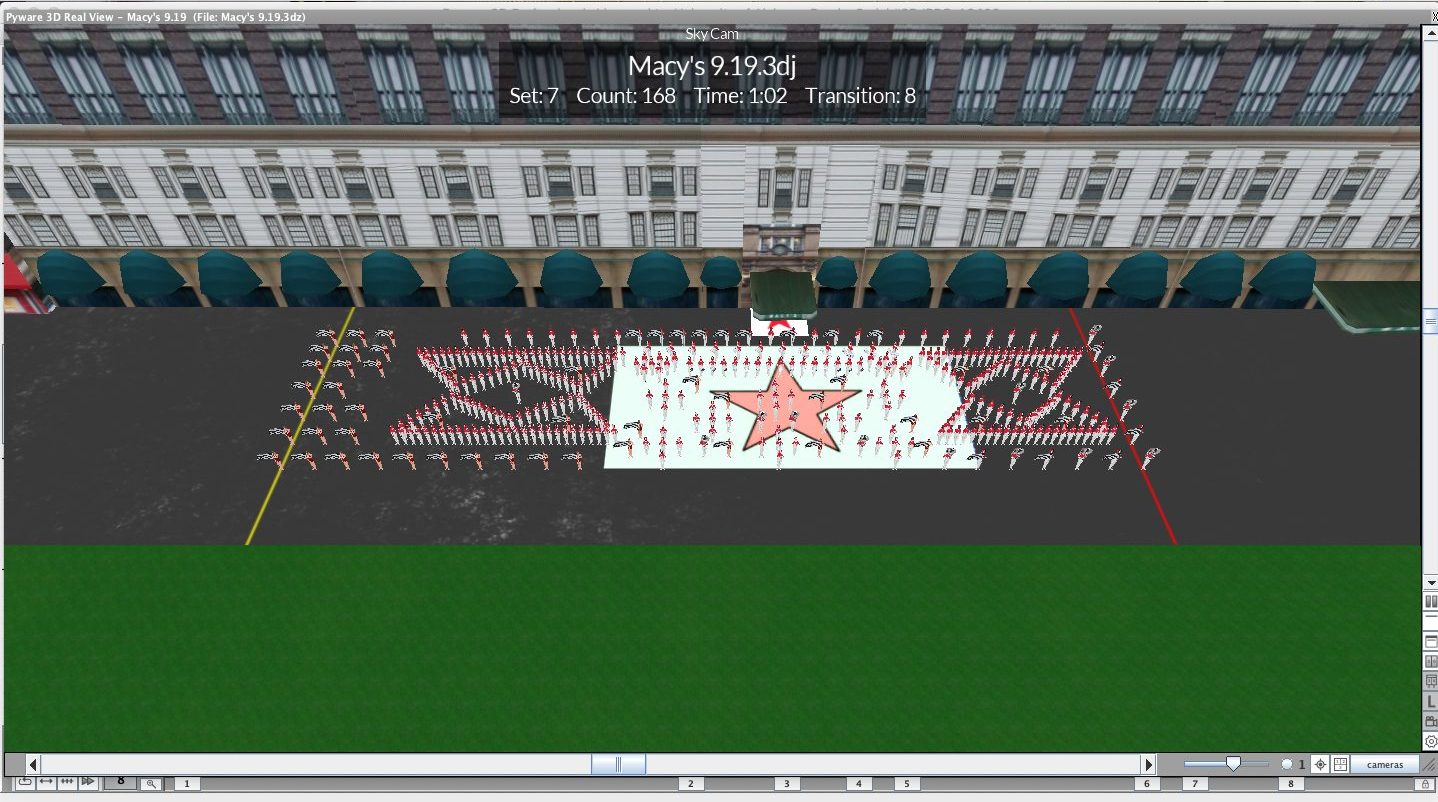 “Pyware was an invaluable tool in preparing for our appearance. The street grid and the Macy’s Street Real View made it so much easier to design the show and to share with the students and staff,” Ozzello said.

“I have been using Pyware since its initial release and I don’t really know how I wrote drill before this powerful tool became available.”

The broadcast tune the Million Dollar Band plans to perform will remain a secret, but they did share their excitement with us as they prepare to escort an essential holiday favorite into Harold’s Square, on Thanksgiving Day…

Like other bands in the lineup, Union High School from Tulsa, Oklahoma was selected to perform at the 2020 Macy’s Thanksgiving Day Parade. As the event was postponed to this year, due to the pandemic, the school has been anxiously awaiting this special opportunity.

“All our staff, students and their families, along with about a dozen Class of 2021 graduates, are ecstatic to be in NYC on Thanksgiving — we have been eagerly anticipating this unique experience for over two and a half years and it’s hard to believe that it’s about to come true!” explained Director of Bands Charles Pisarra.

The band plans to celebrate their second appearance at the parade by paying homage to their state, performing the State Song and Broadway Classic, ‘OKLAHOMA!’

“Pyware has been useful in creating this special performance experience for our students — Pyware’s supplied template of the famous 34th Street and Herald Square Street stage has been easy to use and helpful in the design process,” Pisarra stated.

The Lincoln-Way High School Marching Band consists of 250 talented students across the district. Directed by Dr. Bert Johnson, the ensemble is an Illinois Marching Band Championships Class 6A Champion and Grand Champion and will be participating in this year’s parade. Also, the Brownsburg High School Band, a consistent Indiana Class A state finalist will be performing — led by Chris Kaflik and Tracy Runyon.

The Centerville High School Jazz Band holds 20 Bands of America Regional Championships to their name, regarded as one of the most stellar bands in the BOA circuit. Tim Fairbanks began his teaching career at Centerville in 1997 and his work as drill designer has helped the program rack up continued success.

“Using Pyware to design the Star performance was very beneficial. Having a real view perspective of the performance space helped a lot in the design process,” Fairbanks stated. 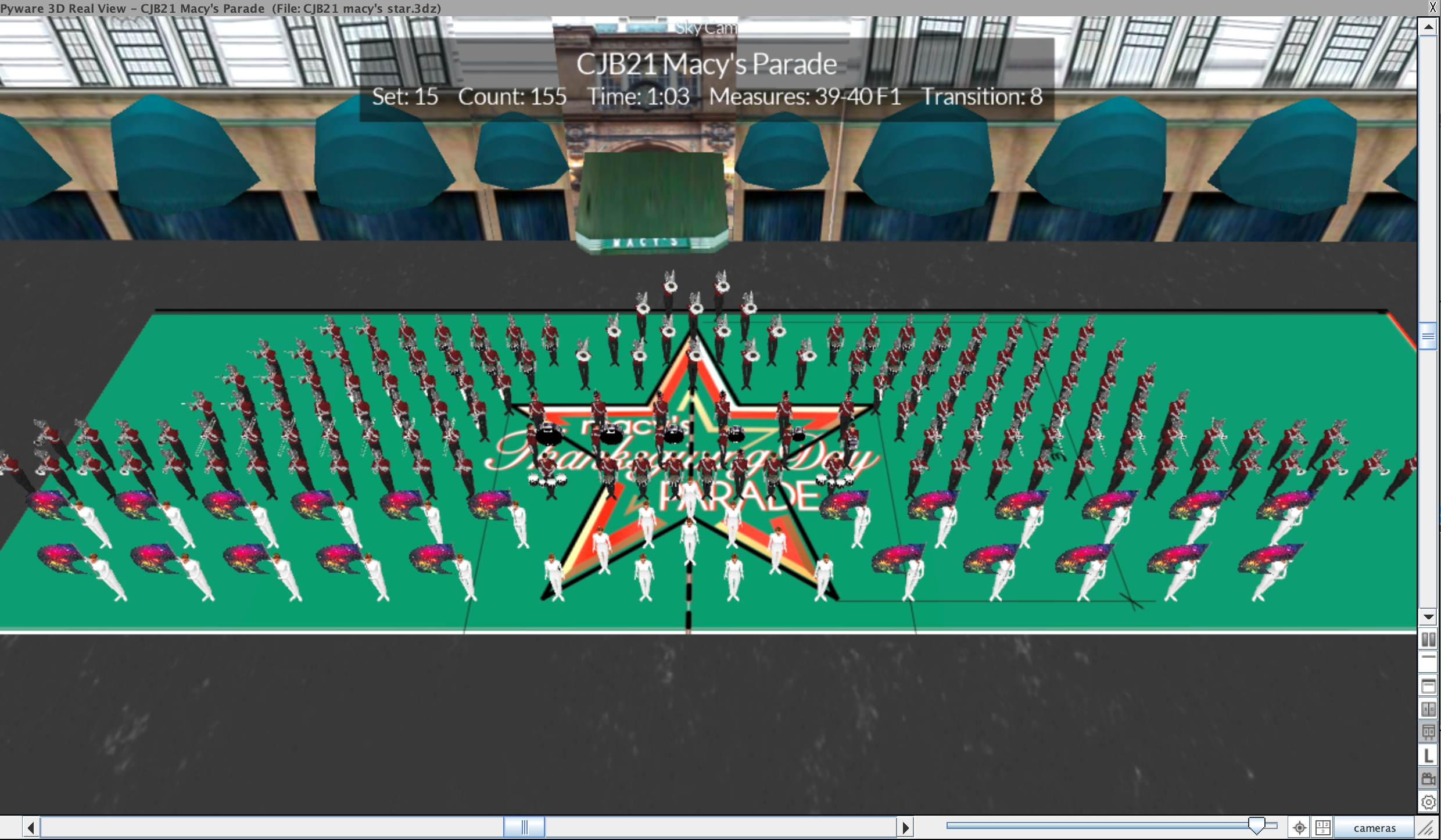 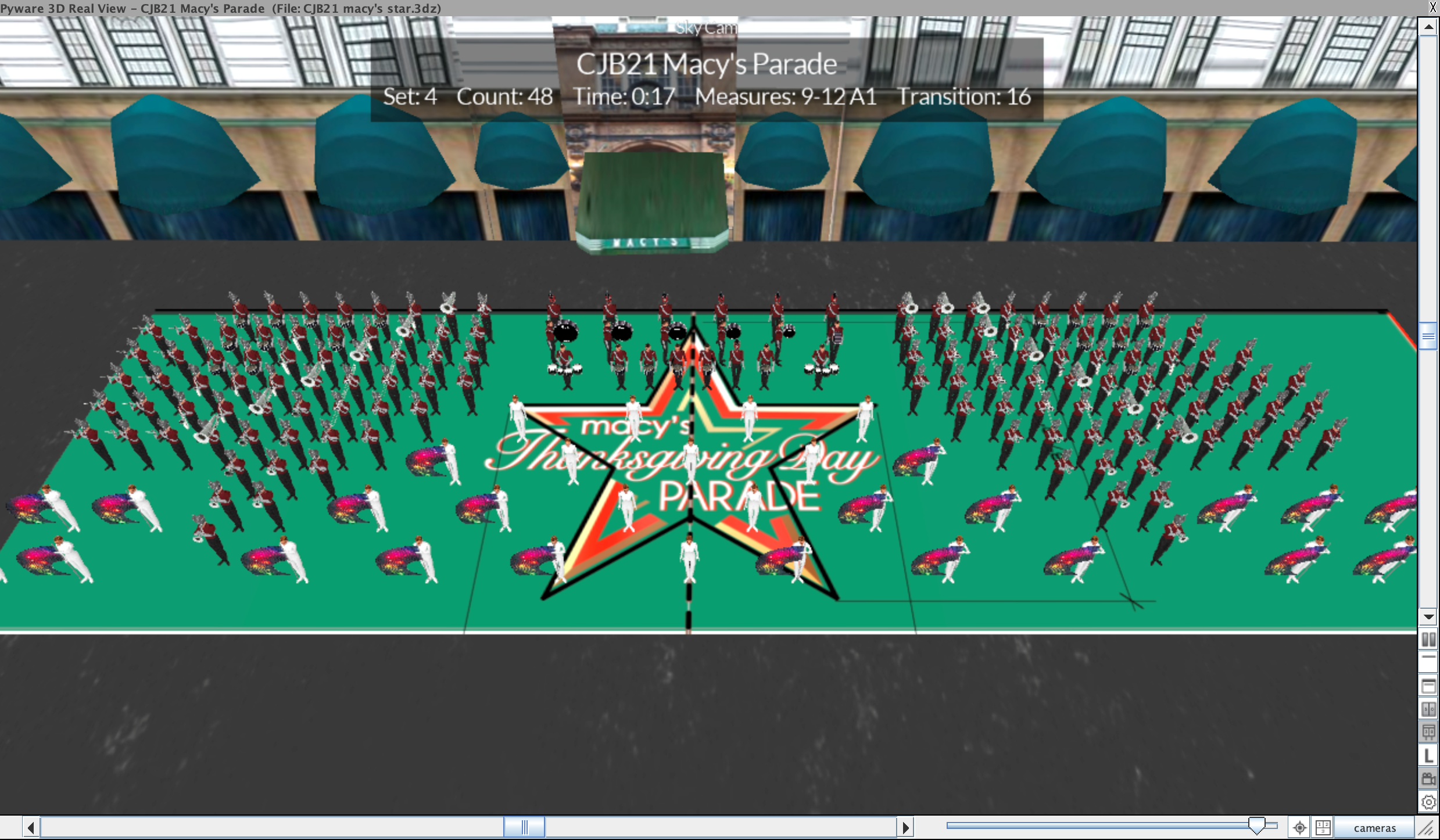 The band will play a series of parade tunes for their ‘Star Performance’ and finish with an arrangement of Stan Kenton’s Jazz Classic, ‘The 12 Days of Christmas.’

The Hampton University Marching Force is no stranger to extravagant performances in front of the masses, as the band has participated in President Obama’s Inauguration Parade, the Honda Battle of the Bands and even Italy’s New Year’s Day Parade and Celebration. Led by Dr. Thomas Jones Jr., the band will be performing the medley “A Celebration of Family” at the parade.

The trip to the parade will be especially memorable for the Ann Richards School for Young Women Leaders, as the marching band celebrates their 10-year anniversary, with the school opening just three years prior!

Given such a brief time in competitive marching, they have already tallied 4 Bands of America Regional Class Championships and received their first invitation to perform at the Macy’s Thanksgiving Day Parade.

“We are celebrating our 10th anniversary this fall — to say that this is an incredible way to honor that would be an understatement!” Director of Bands Stephen Howard said.

“The students, staff, admin and community, are all extremely excited to have our program represent Austin and our state of Texas in this year’s parade. The Austin community has been extremely supportive, and we can’t wait to make them proud.”

The band will play “Deep in the Heart of Texas” and “Firework” through the parade route and arrive at Herald Square to perform “Girls Just Wanna Have Fun” — a particularly fitting tune for the group, as they are the only all-female competitive marching band in the nation!

“The Macy’s grid in Pyware helps us visualize our students right there in Herald Square! Pyware has always made designing and teaching drill effortless,” Howard stated.

The Trabuco Hills High School Thundering Mustangs Marching Unit is a force throughout the western region — their continual success prompted the California governor to select the band to represent the state in the 2017 National Independence Day Parade in Washington D.C. Directors Brad Pollock and Quincy Nguyen will lead the band in their Macy’s Day Parade debut this Thanksgiving.

And finally, two of the nation’s favorites…

Since 2006, the Macy’s Great American Marching Band have united the nation’s most talented high school musicians to participate in the Macy’s Thanksgiving Day Parade. This year, alumni members of the band will be welcomed back to celebrate the group’s 15th year participating in the parade. Also, the treasured NYPD Marching Band, comprised of approximately 50 active New York police officers, will once again make their classic appearance Thanksgiving morning.

Congratulations to these outstanding ensembles selected to perform in this time-honored event. After 2 challenging years living in disconnection, having the streets of NYC once again flooded with parade performers allows us to truly appreciate the sentiment of Thanksgiving and togetherness. Our team at Pyware had the chance to reflect on our love for the marching arts and the amazing opportunity to help the ideas of magical performances come to life. Thank you to all our customers who place trust in our software.

Celebrating its 95th year, America’s beloved Macy’s Thanksgiving Day Parade is back in true fashion! Tune in to NBC, November 25th at 9a.m (in all time zones).