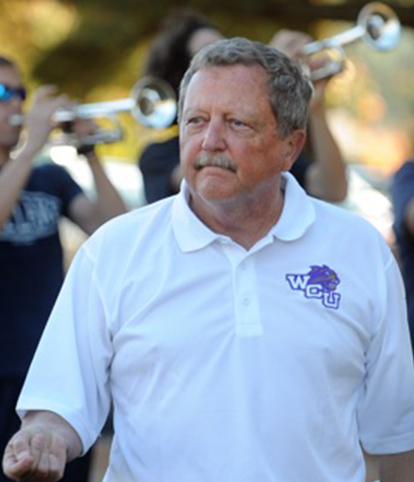 Bob Buckner is a notable drill designer, adjudicator, and educator across the globe. Our team was blessed to have had the opportunity to work with such a musical icon. Closing in on three decades, Bob has served as a Pyware consultant. He has built a company, Marching Arts Education, teaching aspiring drill writers to efficiently chart and write with Pyware.

“Py and Cayleen have been steadfast friends for as long as I have known them. People have absolutely no idea how significant they have been to music education and the pageantry business,” Bob stated. “They’re amazing people that I am glad to call friends.”

Around the 1980’s, Bob arranged a meeting with Py to explain his methods of imagining and creating drill. At the time, he was charting with mylar sheets taped over a printed charting grid.

Bob said, “The system I had developed allowed me to visualize drill as I wrote it. And to be able to measure step size using drafting tools like a compass or divider. It was actually a wonderful way to chart.”

After Pyware’s Charting Aid program was introduced, Bob took his plotters to the dump. Designers could now number, set and track instrumentation, include instructions, and print coordinate sheets.

Since then, Bob has been invaluable to the development of Pyware. We are truly proud and grateful to have him as a member of our team.