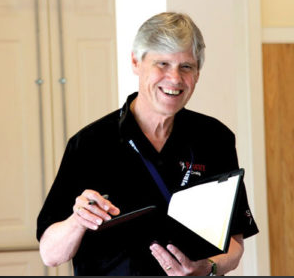 Posted by Barbara-Scott Kolb on September 29, 2020 | Featured | No Comments

Craig Harms, principal consultant for Pyware, has been integral in the development of Pygraphics since the company’s inception. Through every phase of the software’s evolution, Craig has consistently advocated for the product and educated the marching community to help programs use Pyware efficiently.

His journey with the Pyware team began in the early 80’s with the very first edition of the software, Charting Aid. He admitted he was not tech savvy, but that is exactly why our Founder and CEO, Py Kolb, requested that he be the one to present the software to designers and directors. He was able to communicate with the market in a straightforward manner that was easy for prospective customers to understand.

Before Craig’s involvement with Pygraphics, he was reluctant to invite any sort of technology besides a Strobotuner ST6 into his band hall. For roughly 25 years of his teaching career he had designed shows by hand, uncertain if there was any product to make the process easier — let alone better. After being introduced to Pyware Charting Aid, he was sold and has been utilizing and promoting the software ever since.

“I have always been honored to have been a user of every version of Pyware Charting Aid and 3D developed. Not only due to the power of the software for my own design business, but their continued goal of optimum support and dynamic development,” Craig said.

Craig began hosting seminars and joining the team at conventions, upholding a motto of ours — our customers will be “people using computers,” rather than customers needing to be “computer people.”

Py stated, “So many of the most memorable moments I have in Pygraphics are of the wonderful times Craig and I have shared at conventions, seminars, and workshops all over the world. He has been an inspiration for all of us.”

Craig’s passion for helping designers use the software to its utmost, creative potential made him the perfect educator to have hosted exclusive Pyware Retreats and One on One Pyware Design Seminars for over three decades.

“The amazing thing about being with the company all these years is how insightful the company has been, knowing what the market needs and wants,” he stated.

Not only is Craig known as an influential music educator throughout the nation, he is also an accomplished, first-rate custom designer for acclaimed national and international marching ensembles. Visit his website bandfo.com for more information on the services Craig can provide for your program — custom designs, virtual Pyware 3D seminars and tutorial sessions.

His creative talent and expertise with Pyware 3D can truly take your program to the top. Book a session now and receive credit toward the tuition fee for the 2021 Spirit Pyware Design Retreat!

Our team is incredibly grateful to Craig for the leap of faith he took with us in the very beginning, his shared vision of the product’s potential, and his commitment to see the software influence the marching arts for years to come.

“Craig was one of the first adopters and believers in Pyware — from the Apple II to trackball expertise to all other workshops and conventions he attended for us,” Pygraphics Co-Founder Cayleen Kolb said. “He has devoted his time and effort to support us and Pyware. We could never thank him enough, plus we love him.”

Craig joined us in a special episode of Pyware’s Master Class to share his history with Pygraphics and discuss the different ways to employ the Traditional Tools to create Traditional and Showband Style Shows and Military Transitions. View the class below:

“We users could write a book of Pyware stories we each have filed away in our heads, but I think we can all agree our success in the Music Arts is due largely because of the forward thinking of a small company in Texas known as Pygraphics,” Craig said.

Thank you, Craig Harms, for your devotion to our mission in making Pyware the world’s premier drill design software.