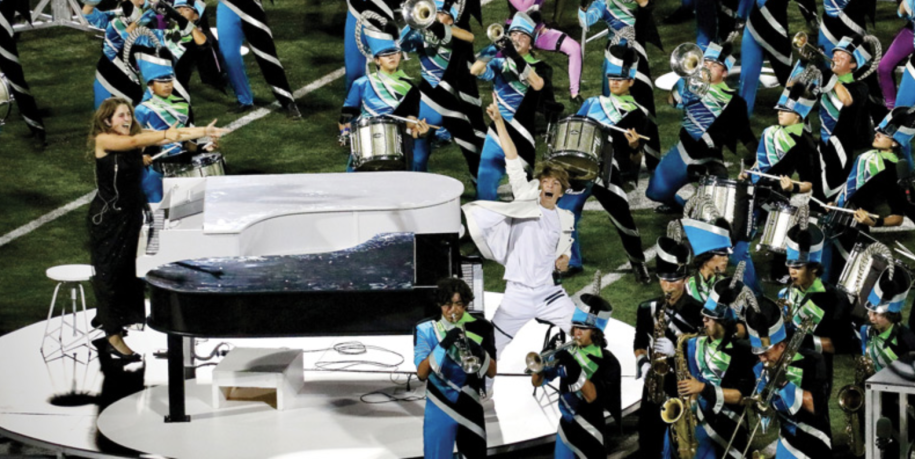 Claudia Taylor Johnson High School has built an exceptional music department over the years, specifically an award-winning marching band that is regarded as one of the top-rated programs state and nationwide. The entire design team for the band has worked side by side for the past 14 years, developing a culture of teamwork and tradition of success. Visual Designer and Color Guard Director, Darryl Pemberton, spoke to the nature of the program and how the bond between staff members has strengthened, as they share a common goal to make each season the best possible experience for their students.

“My time here has been a remarkable learning experience. Myself and all of the design team have been together now for about 14 years and we have a tremendous amount of respect for each other,” he said. “I can’t say enough about our chemistry together; we are always trying to move the needle forward in trying to produce a creative product for our students.”

The CTJ Band recently performed their show “Opposites Attract,” at the Bands of America Regional competition and the Texas Marching Classic.

“This show gives us an opportunity to utilize two talented pianists, and also allows us to create opposing ideas throughout the program, visually and musically,” Darryl said.

They earned second place and the “Outstanding Visual Performance” award at BOA and captured a third-place finish at the Texas Marching Classic.

Darryl’s pursuit into visual design was inspired by his many musical mentors, such as DCI Hall of Fame members George Zingali, Marc Sylvester and Jeff Sacktig…

“If it wasn’t for these individuals who inspired me to stick with the craft, I would not be doing what I am today,” he stated.

In 1996, just prior to the launch of his drill writing career, Darryl was introduced to Pyware while serving as a Visual Technician for The Cadets. He had first-hand experience watching their Visual Designer at the time — Jeff Sacktig — use the tools of the software to create the corps’ brilliant drill formations. It was then that Darryl decided to begin using Pyware for himself and has continued ever since.

“Pyware allows us drill writers to be more efficient during the creative process. The many functions within the software allows the writer to focus on many layers throughout the program and allows us to see animation in real time as we create, which is a huge advantage from traditionally writing drill on paper,” Darryl explained.

“Using the software opens up so many possibilities creatively.”

His musical aptitude and flair for design has allowed Darryl to work with several of the most premiere ensembles in the activity throughout his career. He held different visual design roles for The Cadets for nearly 15 years, served as Drill Designer and Visual Caption Head for The Crossmen, and Visual Designer for The Boston Crusaders.

Congratulations to all the directors and talented, powerful musicians of the Claudia Taylor “Lady Bird” Johnson High School Band for such incredible, well-deserved success!