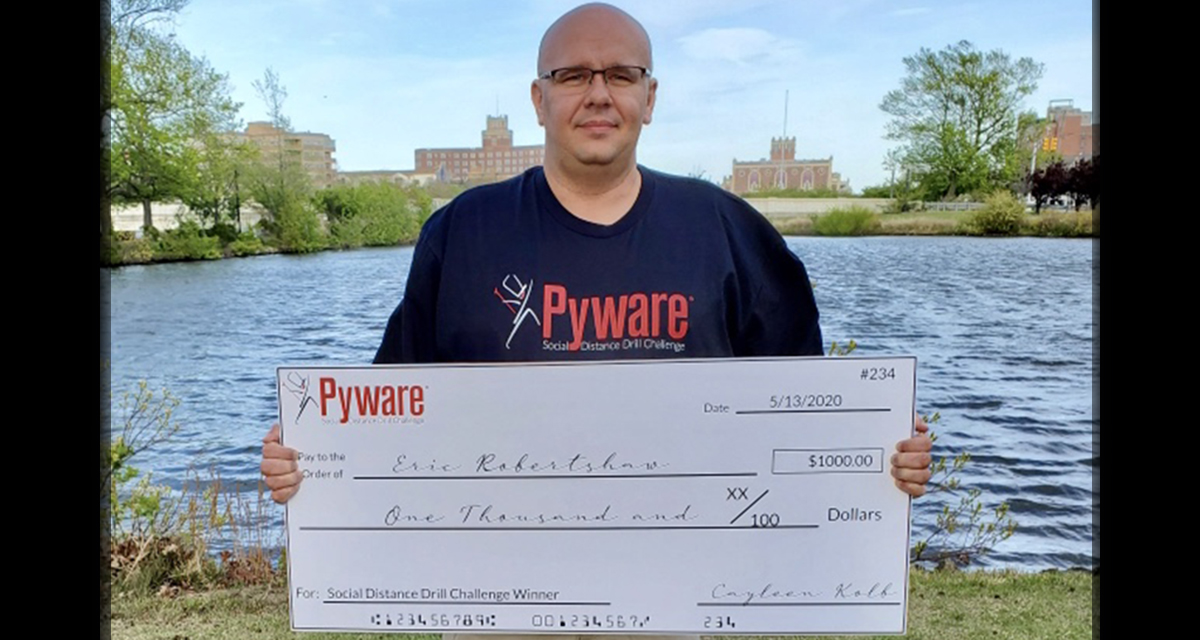 Eric Robertshaw inspired us all with his work in Pyware’s first-ever drill writing contest, the Social Distance Drill Challenge. The panel of judges consisted of prestigious designers Michael Gaines, Tim Fairbanks, Kevin Nix and Bob Buckner. After reviewing all the submissions and selecting their favorites, the panel came to a consensus that Eric’s drill earned first place!

Eric is incredibly active in several avenues of the music profession. As his predominant vocation, he serves as a Master Hearing Instrument Specialist for Beltone Hearing Aid Centers. Eric is a freelance trumpet player in the NYC metropolitan area and a conductor of two community bands in New Jersey — Old Ridge Community Band and The Colts Neck Community Band. He also plays trumpet for the “Asbury Brass,” a popular brass band of the Jersey Shore.

For roughly 20 years, he has been a visual designer, writing for high school marching bands, drum and bugle corps, and indoor ensembles. Although Eric started his career hand-writing drill, in 2002 he shifted to Pyware and has been using the software as his sole drill design tool ever since.

“My experience using Pyware has been incredible!” he stated. “The customer service from Dustin and the entire team at Pyware is truly something special. The software continues to evolve year after year and I know when there is something I’m struggling with or just wish there was a different, faster way to do something, I can always reach out and get help.”

As seasons were declared cancelled due to the pandemic, our team wanted to present designers a competition to stretch their imaginations, practice writing skills, and explore different Pyware tools during this time of isolation.

“The Pyware Social Distance Drill Challenge was a lot of fun! Just like every other visual designer right now, I don’t know what the future will hold for our activity in the near future,” Eric said. “I thought taking part in this contest would be a great opportunity to learn a new skill.”

Eric discussed his approach to writing for this contest remained the same in terms of planning for effects and staging the musicians successfully. Although, he admitted keeping all the performers at a 6-foot minimum distance throughout the drill was not an easy task.

He said, “The challenge came in the actual manipulation of forms at a bigger interval than I would have chosen. Different design choices had to be made and a lot of refinement went into making sure everyone would be at a safe distance.”

The competition gave Eric the opportunity to practice using more animation within the color guard, as well as choreography in the winds and the percussion — techniques he does not ordinarily have much time to focus on.

The Pyware team was thrilled that our first drill challenge proved to be a fun way for designers to test their creativity and exercise their skills with Pyware, especially throughout this unconventional time. We also want to thank our judges for taking the time to be a part of the challenge!

Eric said, “I would like to thank Pyware for bringing in an incredible panel of judges. I was truly humbled by their feedback.”

We asked Eric if he would be interested in participating in another Pyware Drill Challenge… He responded, “Absolutely!”

Well, good news! Our team has decided to host another competition. Details to be announced soon!