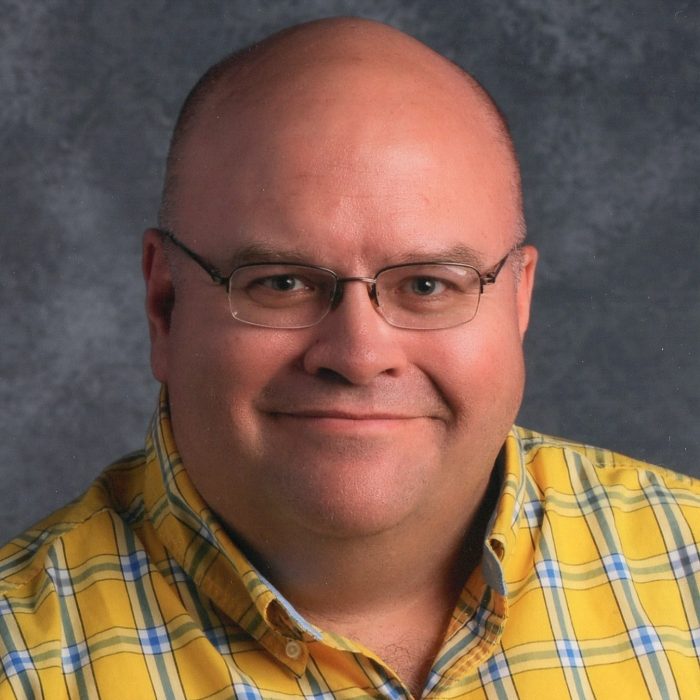 Posted by Barbara-Scott Kolb on March 8, 2022 | Featured | No Comments

Victor Neves began writing drill in 1984 with very fundamental tools that could be found at any art or supply store. He drew forms with pencil on 2-step grid drill writing paper, finalizing them in ink. He sketched curves with a compass, protractor, French curve tools, and an architect’s bendy ruler — intervals measured with a folded sheet of drill paper.

Three years later, Victor discarded this rudimentary approach to designing drill, after he was introduced to the revolutionary tool of Pyware Charting Aid. He had joined the design team at the University of Utah, where they were using Pyware on an Apple IIe computer with dual floppy drives and a trackball, displayed on a 13-inch green screen monitor. The team also owned an Apple ImageWriter, a product line of dot matrix printers. A set of gears would pull the long, folded strips of drill paper, while Victor and his colleagues patiently watched, as it would misfeed every so often.

Victor explained, “All of that sounds clunky now, but it was amazing in 1987. Pyware gave precise spacing, smooth curves, animation, zoom, and tilt. I would write a page of drill, animate the move, and then my director, Rick Clary, would watch it and say, ‘Okay, that looks cool. Now how do we teach it?’”

They would then revise his work, animate it, and organize a lesson plan. When this method was complete, the team had a vision of how the show would look from the stands and were ready to introduce it to the performers.

Victor immersed himself in the world of marching band, as a director, instructor, and drill writer. He built a drill design business, Bandtek, providing marching band drill to a sundry of groups with student success as its core purpose. When he first launched the business, he was using a DOS (disk operated system) based version of Pyware. Victor’s children grew up listening to the “click, click, click” of the spacebar and show music playing on his boom box stereo, as he designed countless shows. High school and university bands— of all sizes and skill levels — throughout the country, Europe, and Asia, have used Bandtek’s drill. 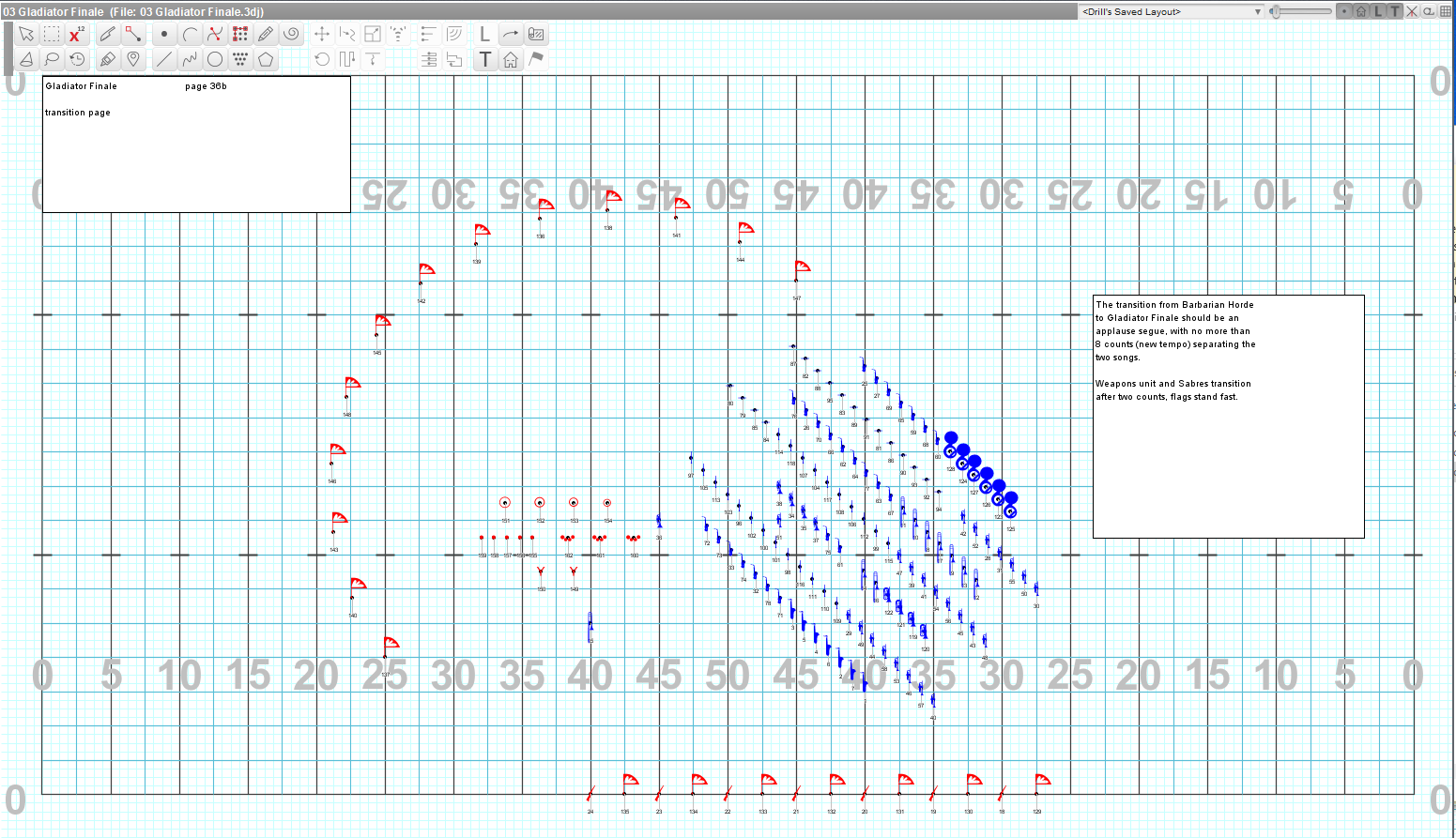 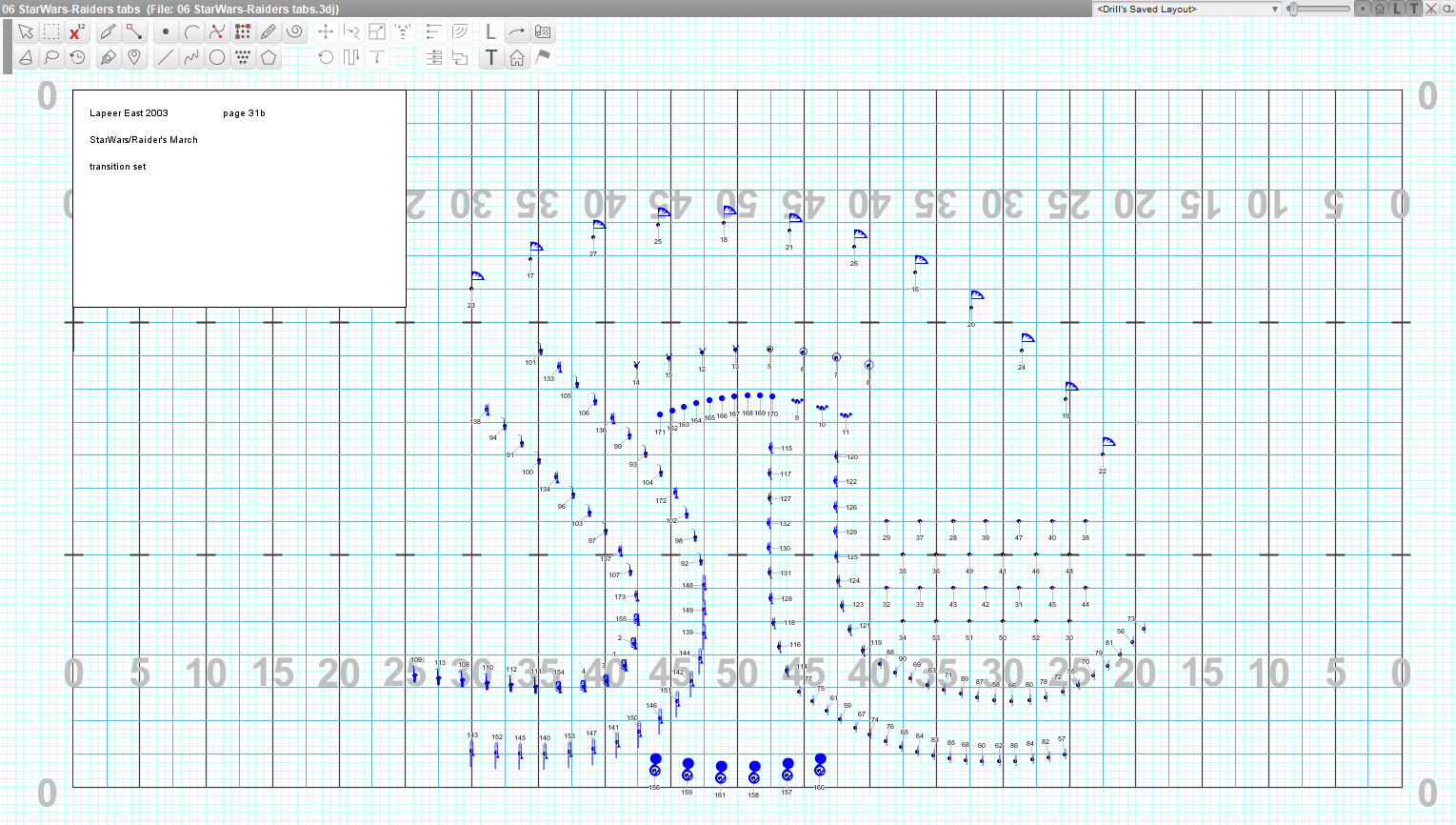 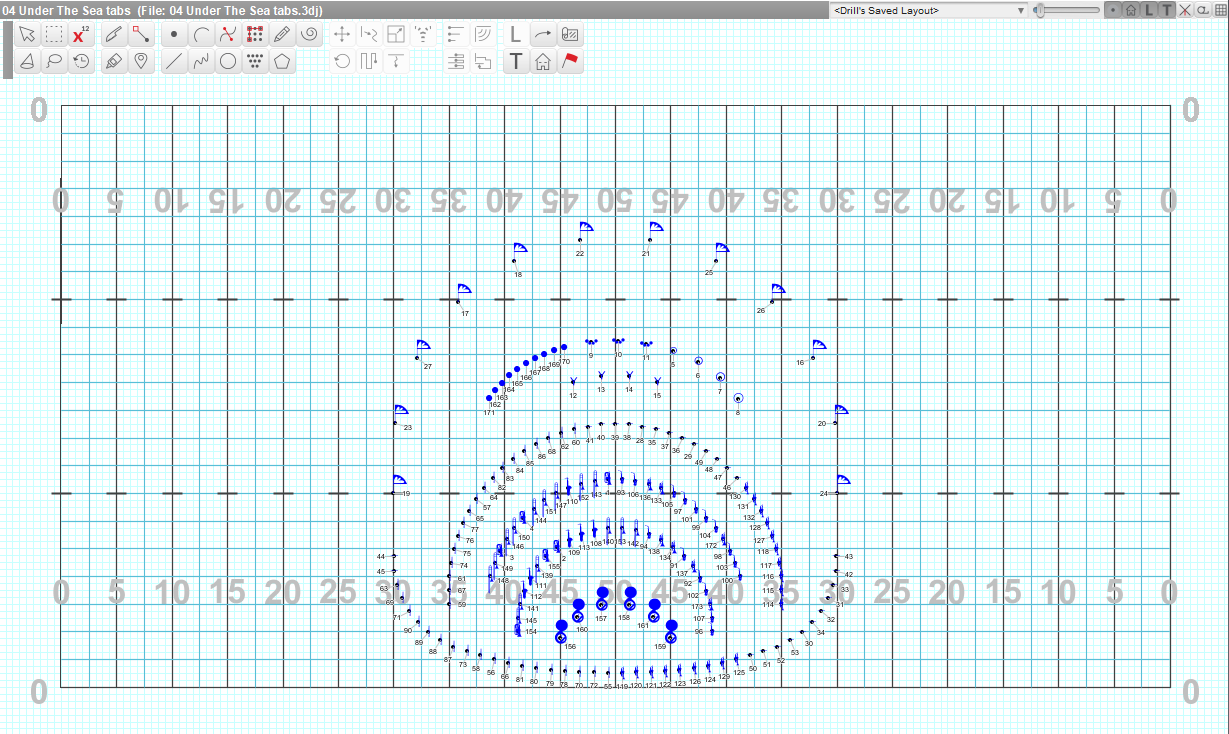 Since the company began, the marching arts activity, along with technology, has rapidly evolved. Pyware matched the pace of advancing technology — as computers were improving and higher resolution printing became available, Pyware upgraded as well.

“Inputting counts got easier with Pyware. The perspective (tilt and zoom) windows improved. Individual coordinate sheets were added,” he said. “Every time the software moved forward, I was able to write faster, better drill, and the students were able to learn faster, achieve more, and perform better.” 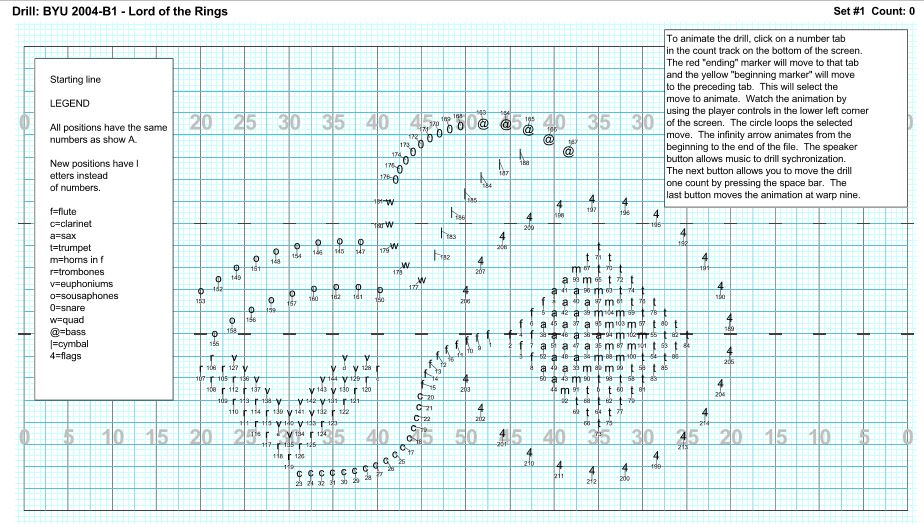 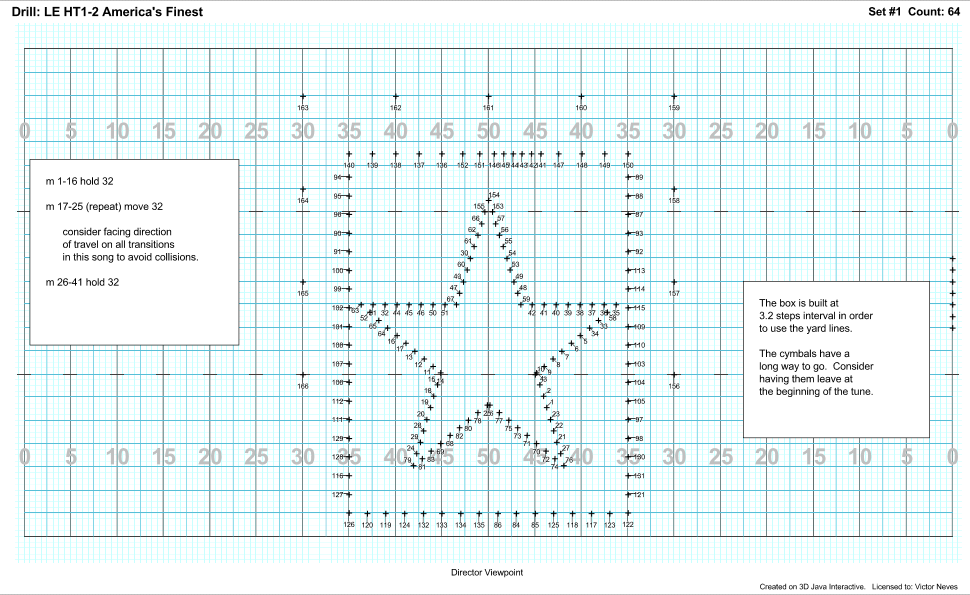 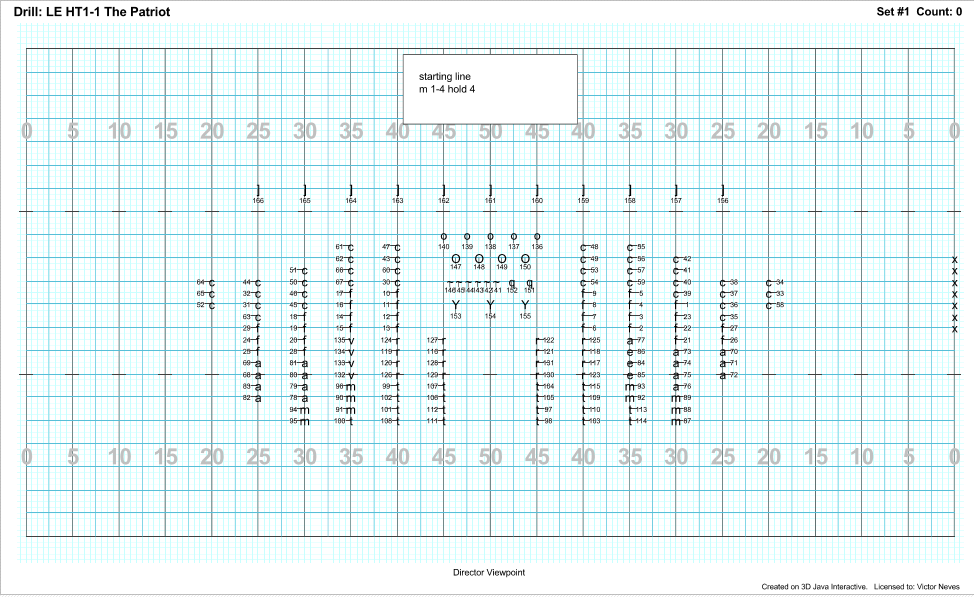 As Victor discussed his journey with Pyware over the years, his enthusiasm for designing seemed topped only by the joy seeing his students succeed. While giving his take on the evolution of Pyware, he spoke emphatically on the impact different additions to the software had on the student experience.

“The impact on engagement and learning can’t be overstated,” he said. “When integrated music and ‘real view’ came along, students could see more than just the forms. They could hear and see the show with uniforms, flags, equipment, props, and all. Not long after, students and staff were able to load the drill into their phones and tablets and the technology came right onto the practice field. It brought even faster learning, higher achievement, and performance.”

Victor has worked with and provided drill for countless students, throughout the nation and overseas. His competitive bands have earned first-place awards in at least 18 states, including multiple state championships, and they have succeeded in various TOC shows and BOA finals.

As a careerlong Pyware user, Victor has formed a bond with the Pyware team that has only strengthened year after year.

“It is not an exaggeration to say that while Pyware helped shape the activity, it also played a driving force in my career, my teaching practice, and my ability to provide for my family. The marching band world and my personal world is better because of Pyware. Over the years, competitors have come and gone, and none have the power and speed that Pyware does,” he explained.

Several members of Pyware conveyed similar sentiments of appreciation having Victor as a lifetime Pyware user. His constructive assessment of the software’s development over the past 4 decades has been vital to the success of the company — Pyware Application Systems Director, Dustin Merrell, can attest to that.

“I have known and worked with Victor for over 20 years. He has always been an amazing beta tester with valuable feedback. He has done a fantastic job with the many groups he works with. And we really appreciate the support he has always given us.”

Since day one, the continual support and advocacy Victor has shown for Pyware is truly cherished within our team. We would like to thank Victor Neves for the shared conviction to improving the marching arts, his infectious joy for drill design, and for his contribution to the collective marching band community.