Wrapping Up 40 Years and Still Counting!

Wrapping Up 40 Years and Still Counting! 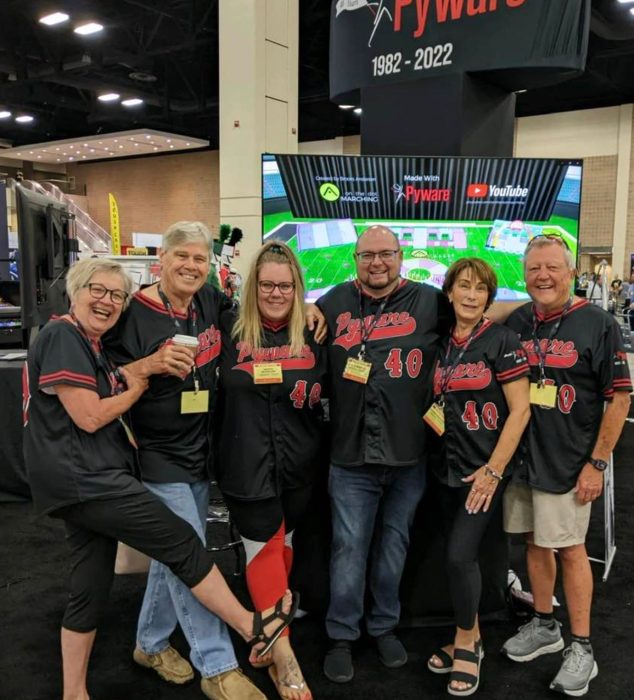 Posted by Barbara-Scott Kolb on December 30, 2022 | Featured | No Comments

A few words to describe this incredible year for the Pyware Team.

Throughout 2022, the celebration did not stop, as we marked our 40th year in business! Not only did we reminisce on the inception of the software and the beginning of this wild journey in drill design, but also took time to reflect on the company’s progress over the course of 4 decades.

The highlight of our anniversary celebrations was receiving the 2022 Music Industry Award at the TBA convention. In front of so many talented leaders in the field, Pyware Founders, Py and Cayleen Kolb, were recognized for their extraordinary contribution to the marching arts and music education. Members of the Pyware team toasted the award with extended Pyware family, as this honor will be memorialized in our company’s proud history. 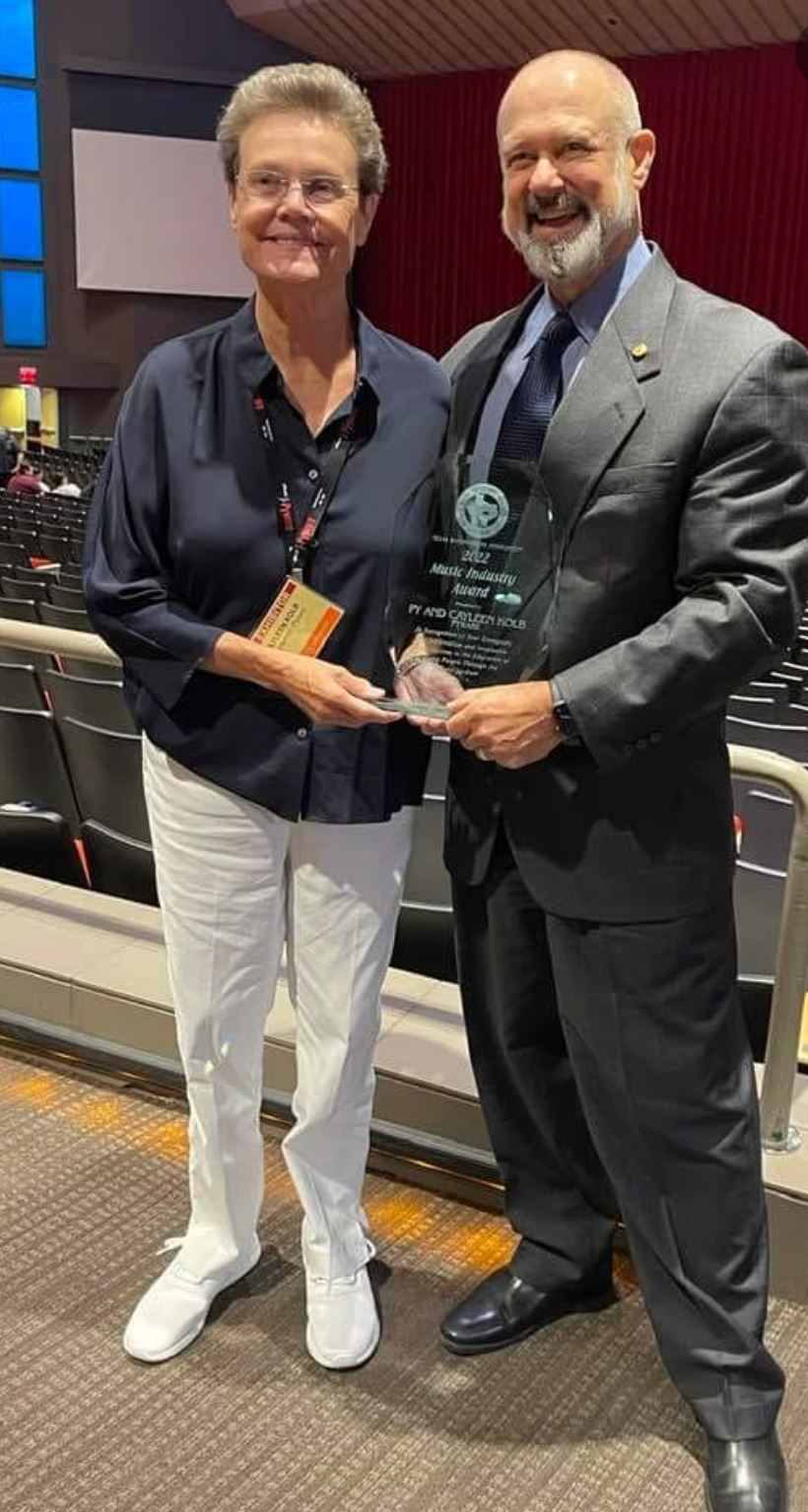 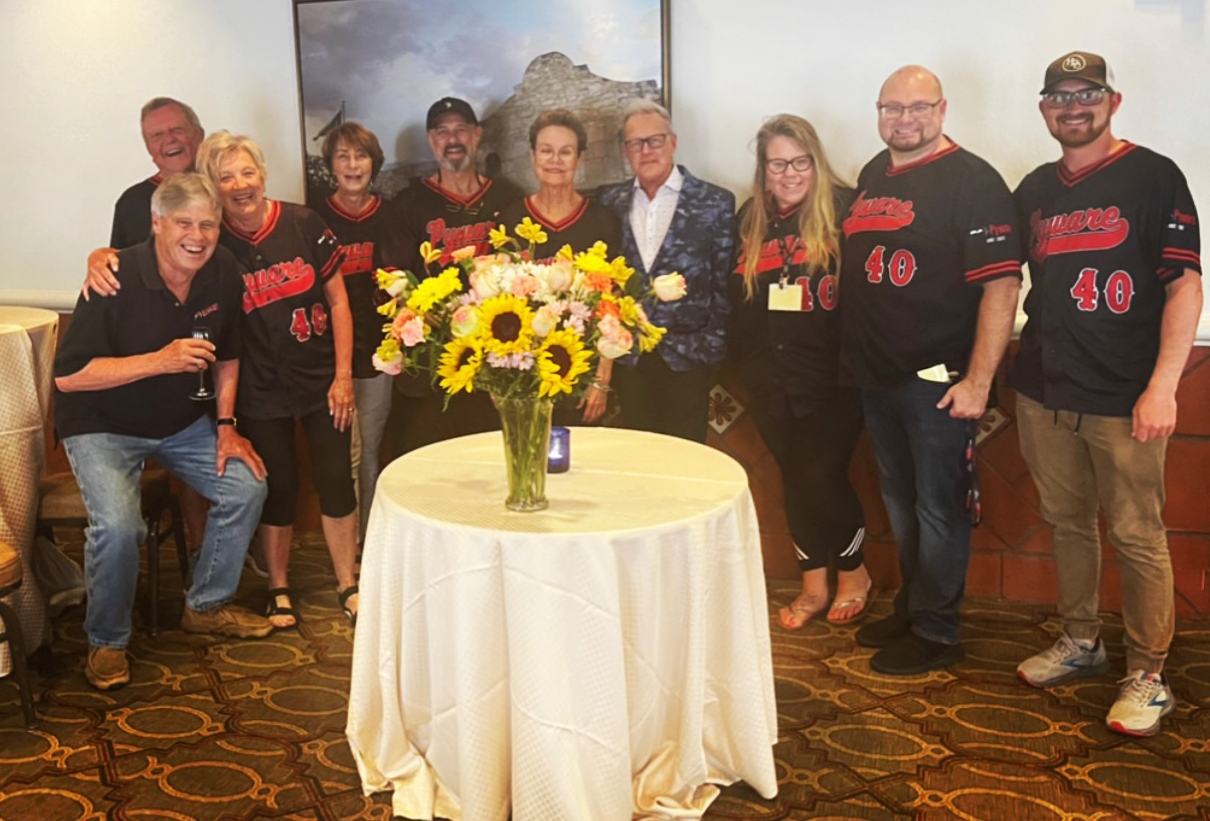 We also had the privilege of being featured in several magazines. It was a thrill to see our story in different respected publications, such as Bandmasters and SBO.

It was our favorite year for swag! We love seeing our customers decked out in Pyware gear and the “40 Years and Counting” themed swag was a big hit.

Our annual sale days, Py Day and Cyber Monday were very successful with upgrades and several new purchases! And we released a highly anticipated, new product…

Placing the power to edit your 3D drill files in the palm of your hand. The perfect sidekick to make impromptu changes to drill, on the field and on the fly. These changes made on your mobile device can also be instantly synced to the UDB App for your students to have the most updated drill. 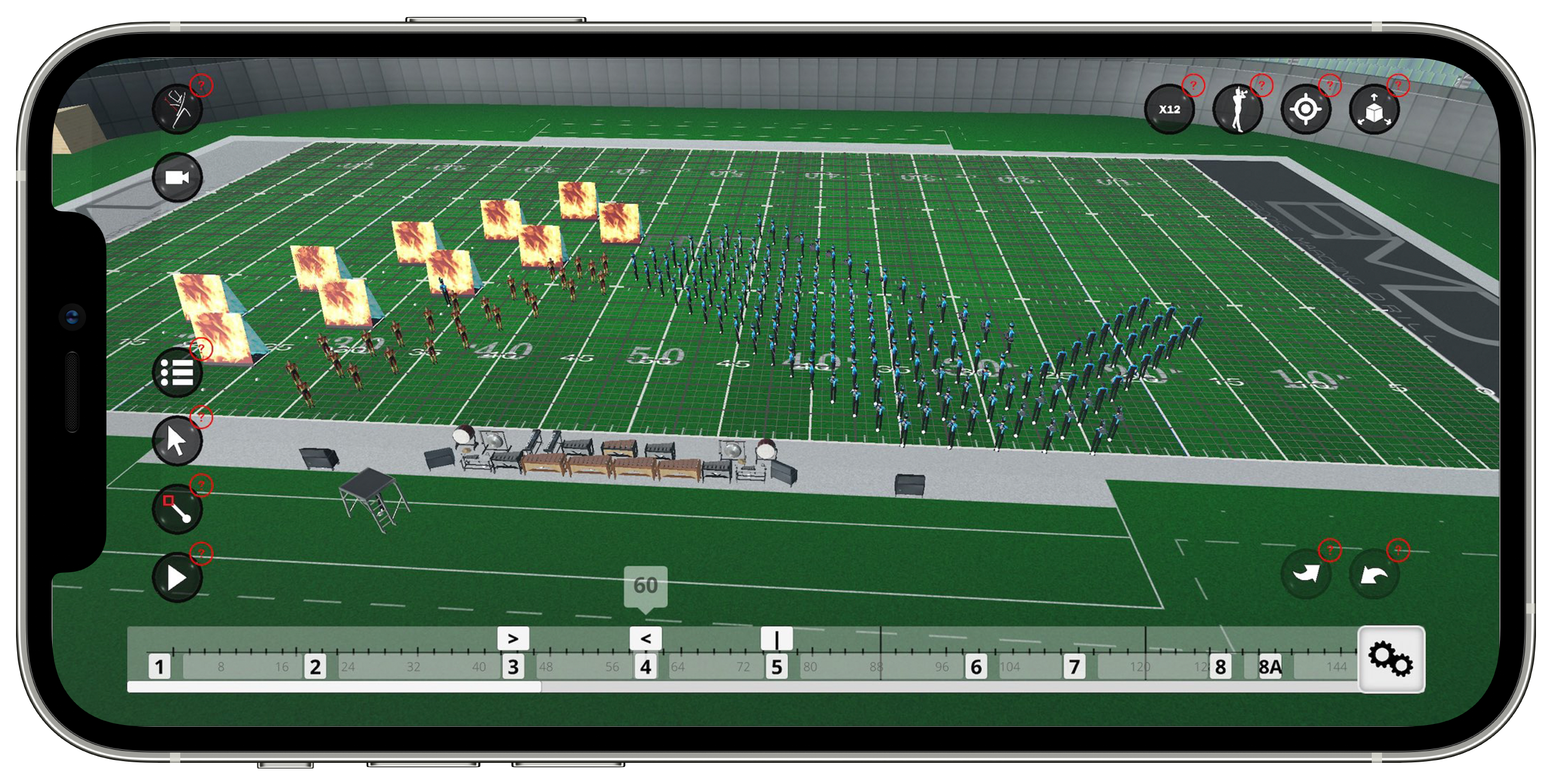 Finally, connecting with longtime Pyware users is what makes our job even more fun…

I personally had the pleasure of questioning several lifelong Pyware users and sharing their journeys in the Pyware Users Spotlights. It was an honor to hear stories from some of the most distinguished designers in the marching arts — music educators who took a chance on the first iteration of Pyware, “Charting Aid,” all those years ago and have consistently advocated for the software ever since. From the “Charting Aid” days on an Apple IIe computer and plotter, to 3D animation with the latest Pyware Version 11, the support from our customer base over the past 40 years has been overwhelming.

One of the very first advocates of the software, Craig Harms, shared one of his favorite stories with us — his introduction into the world of Pyware consulting.

“During the early 80s, as Director of Bands in Woodland Park, Colorado, a morning at the local java junction, a good friend and Henco Fund Raising client of Gary Stutzman, told me about a young man and former Texas Long Horn Marching Band trombonist who had created a computer software (whatever that was) and could assist band directors design marching band drill.

‘You gotta be kidding me!  No way!’ How could there be a machine out there that could emulate my tumultuous “love and hate” fun I had been experiencing for years of inserting dots, on charting paper not to mention the joy I had of washing White Out (most of us baby boomers know that as typewriter correction fluid) from beneath my fingernails.

After years of using the formula, which for me, NEVER worked, using π-r-square to calculate the area of a circle, given the radius, diameter or the circumference, or in designers lingo… “to equalize positions around a circle.” I was told the software could do it perfectly.  I was skeptical but thought it a good idea to give it a shot. So, I scheduled to bring this “Texas Kid” in with his computer gear to my school in Colorado to pitch me and some other director friends that this “techy” stuff could do what we had been doing with pencil and paper, better and faster…

Really? Well, to my amazement in a blink of an eye that Pyware…computer stuff did it!  A CIRLCE OF 16 EQUALLY SPACED DOTS!

However, I was told, in order to make magic I would have to relinquish my light board, flex curve, pipe cleaners, charting paper, acetate and replace all with this Apple IIe computer ‘thang,’ floppy disks, disk drives, trackball, and Amdek Amplot II Plotter. Oh, and yes…that which we all still hate…software user manual.

During a delicious dinner my patient wife, Bev, and I were told by Py Kolb (yip…true.  That is his name) was looking for directors who also wrote drill to act as “disciples” of a new product called Pyware Charting Aid.  He wasn’t looking for computer people, but directors who wrote drill and knew the band director market. My mission would be to spread the “good word” about something many of us now take for granted. To be honest, I sort of thought it a nice honor, finished desert and a glass of wine (to this day I’m not sure if he was old enough to drink) said our goodbyes to this smart, nice kid, and let it go.

Well…. That is when it got interesting. That was a Saturday nearly 40 years ago.  The next Wednesday, I received a long-distance phone call (no email or text) from that Py guy about how he was having to make a presentation at the Henco Corporate Mississippi Headquarters to help market Charting Aid to band directors and was unable to make a promised presentation at the New Mexico Music Education Association Convention and could I take his place since we lived near Albuquerque. My response?  I don’t have a computer and besides taking a very basic class on “how to turn on a computer,” I didn’t have a clue.

The response was… “All the pieces and parts are on their way to you marked and color coded to show you how to assemble and plug in everything.”

Thursday, after receiving the ‘system’ in a box, the phone rang again and the first Pyware 20th Century telecommunication “zoom” session began. That young kid was so patient with me, which I would later experience would be the Pygraphics technical support model.

Oh, by the way… I and another good friend, and Pyware disciple, Bob Buckner kept the gear and the color-coded cables in the same boxes for years, for fear we wouldn’t remember how to put it all together.

After the Friday night school basketball game, Bev and I loaded the carefully repacked boxes into the Subaru station wagon and took off for a “Star Trek similar journey,” to parts unknown.  At the time, I never imagined that my life was about to take a fabulous new path as a member of the Pygraphics Family.

After an overnight drive, almost running out of gasoline due to the lack of gas stations on the reservation between the New Mexico boarder and Albuquerque, we reached the university just in time to be met at the session doors by several Henco Reps holding lit chimney candles. (Remember those?} The electricity in the hall had just gone out. Almost relieved, thinking maybe I would get a reprieve, I still managed in the dark, to carefully remove this “machine of the future” and gingerly plug in the color-coded cables. Magically, the lights came on and YES, so did the IIe. ‘Whew!’  As the doors opened, I can still hear my beloved wife mumble – this is really is going to test your b-ll sh-ting ability.

It only takes a spouse to cut to the chase. Right?

Way before projection systems and large screen monitors, that small green monitor displayed for the first time for directors in the room what that ‘Py Kid’ had done and still is doing for the world of music education and the standard of creative technology. Our world was going to change and become exciting.  With the Py kid’s vision, we would soon speed and enhance our jobs as educators with Pyware 3D, Music Writer Notation Software, Music Administrator, Real View Animation, and Standard of Excellence Assessment software.

I am truly blessed to have taken that drive to Albuquerque. Believe me it has been a great ride.

“Anybody need a flex curve and light board?”

Following Mr. Py’s direction, our team will continue to move the needle in drill design software, bringing our customers and family, the best product we can.

Thank you all for taking this ride with us!